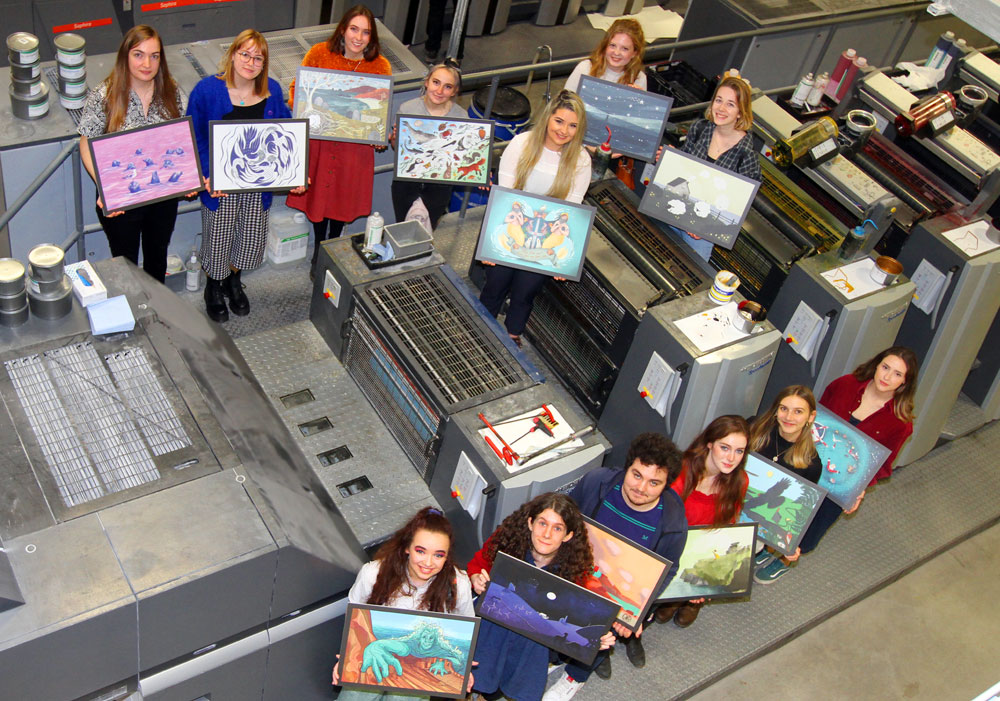 Each year we team up with talented illustration students from Falmouth University to release the official St Austell Printing Company Calendar.

All the artwork in this calendar was created by 13 very talented final year illustration students at Falmouth University.

We asked them to create artwork based on the theme of “Land, Sea and Air”

Land: From isolated moorlands, to picturesque beaches and rugged coastlines; the landscape of our county is one of the most diverse in
the country.

Shrouded in myth and legend, some of Cornwall’s landscape continues to be redefined by industry and progress.

Sea: Cornwall is the only county in the UK to be surrounded by water on three sides. A staple of Cornwall’s identity, the sea has fed generations and defined industries.

From smugglers to fishermen; Gig rowers to sailors and people using the coastline as
their playground.

Air: Cornwall is exposed to the full force of the prevailing south-westerly winds that blow in from the Atlantic Ocean.

This, combined with rural locations means that the county enjoys an excellent quality of air
to breathe.

Meanwhile the skies above Cornwall also have stories to tell; From commercial and military flights overhead, to the first ever transatlantic radio transmissions. 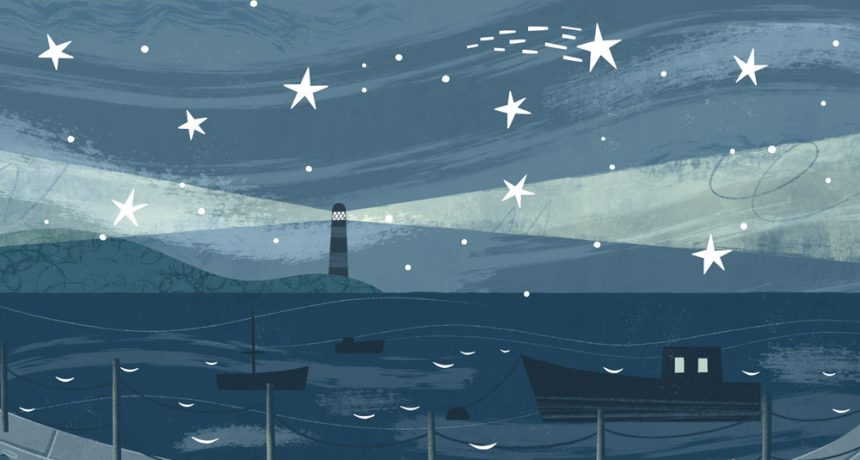 Cornwall has some of the most beautiful night sky, especially in some places along the coast without much light pollution. On clear nights I like to gaze upwards and maybe spot a shooting star or two! I’ve tried to capture that in my illustration, along with a couple of other Cornish coastal elements. 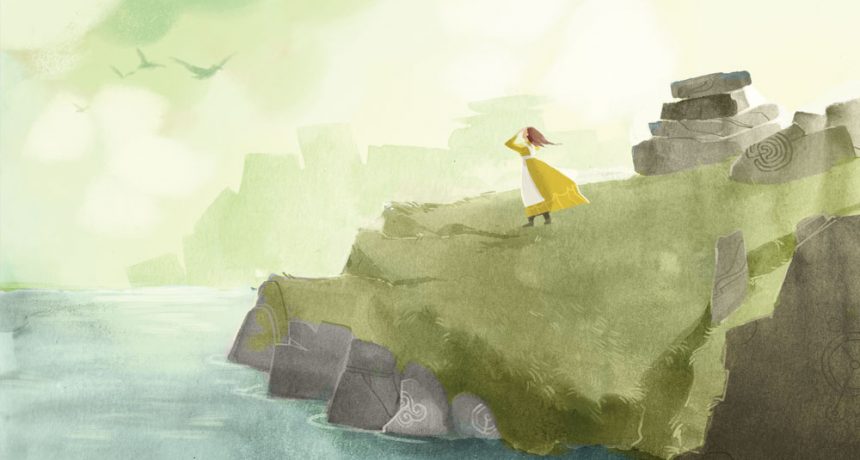 The illustration encapsulates the cold January winds, whistling through the old granite rock formations, more ancient than the tales that lie under every stone. 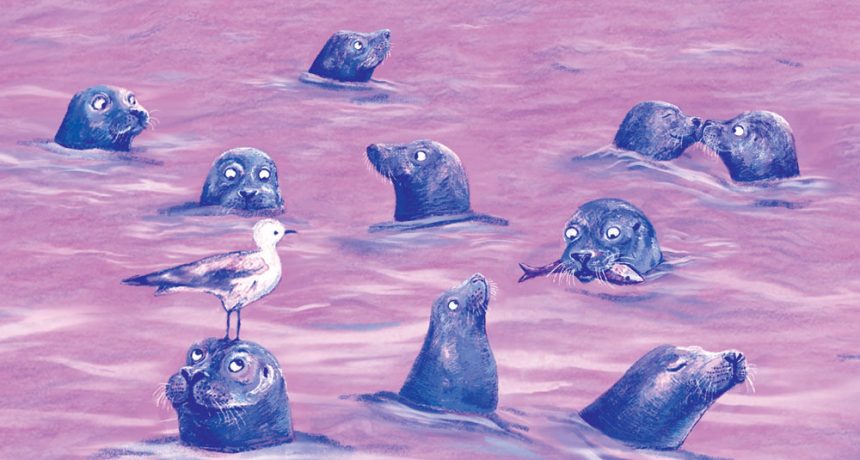 A celebration of the Cornish Seal Sanctuary and their outstanding rescue and rehabilitation work with seals and other animals. The sanctuary was founded in 1958 in St Agnes and is now situated in Gweek. I was particularly inspired by the colours, light and texture of winter sunsets. I found it all to be truly reflective of the calm and serenity of the sea, and the relationship it has with wildlife. 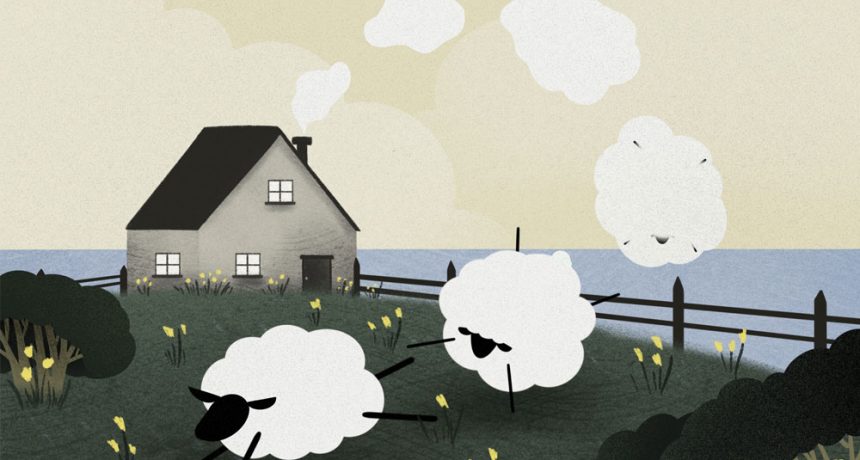 A peaceful and harmonious dreamscape of early Spring. The warming fire of the unseen hearth fashions smoke that emerges, billowing from the chimney in soft curls, slowly transforming into fluffy Cornish sheep and alluding to the never-ending cycle of the seasons. Reminiscent of collage, the sheep superimpose themselves onto the meadow, with early spring daffodils overlooking the sea. 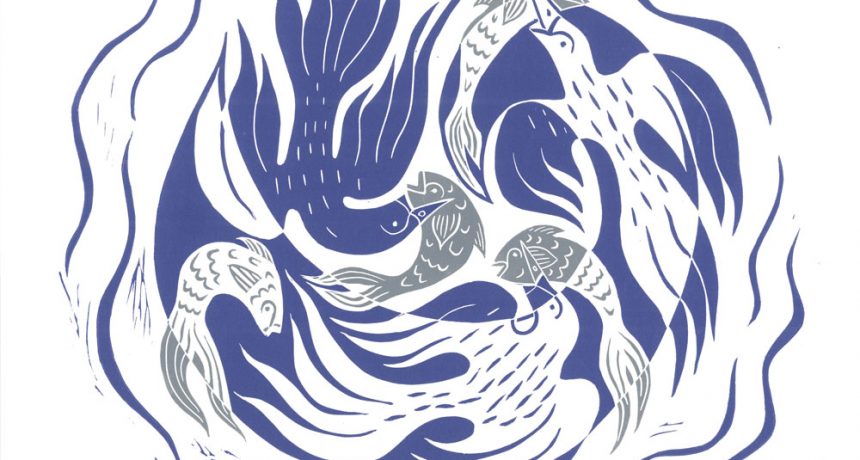 Following the theme of ‘Land, Sea and Air’ the illustration focuses on gannets diving for fish and the consequent transition of air to sea and sea to air. The practicalities of the printmaking process enables the exploration of positive and negative space. 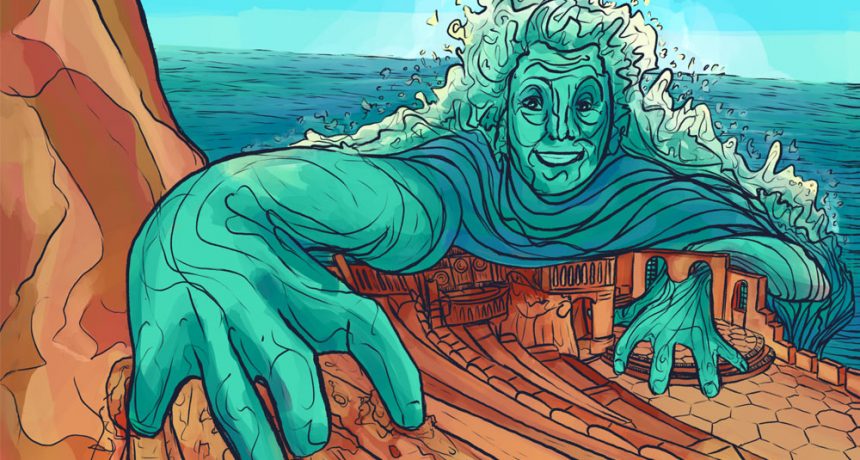 There was once a tall old lady who built an entire theatre out of the cliffs of Cornwall. Rowena Cade’s legacy continues to shape the cliffside to this day. 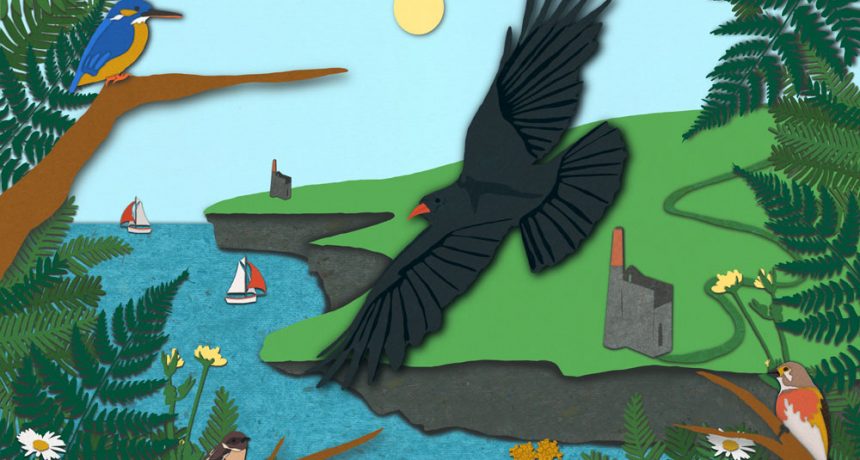 Inspired by the land, sea, and air all working as one allowing for the wildlife and its inhabitants to flourish. This illustration focuses on the conservation success story of the Cornish Chough. After successfully being reintroduced to the area in 2001, they have been known to nest in the old tin mine shafts across Cornwall. 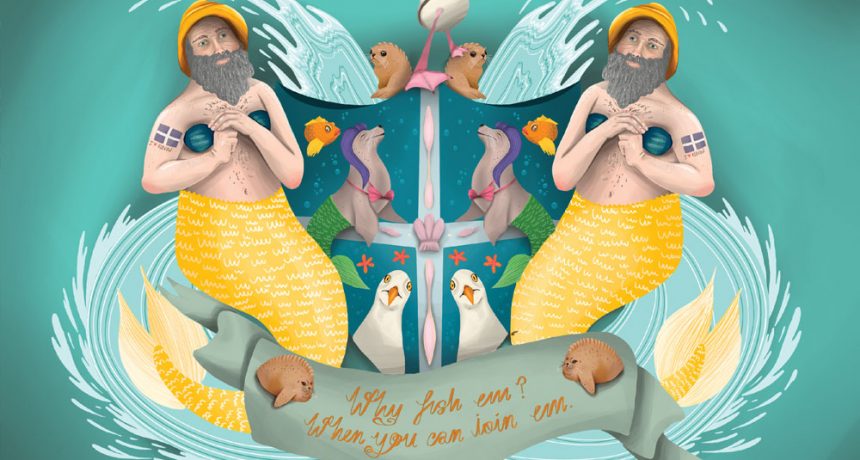 A fisherman’s tale – a surreal interpretation of the traditional Cornish crest. The positive ecological message is ‘Why fish em? When you can join em.’ Because why wouldn’t you want to swim with Cornish pasty seals? 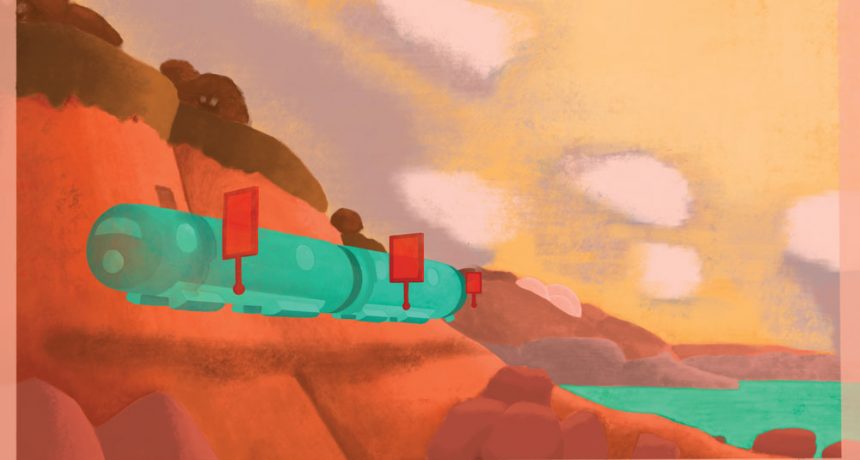 Inspiration is taken from family holidays as a child riding the Looe Valley Line from Liskeard, specifically where the line opens up to reveal the river alongside and more recent train journeys from Paddington to Luton. 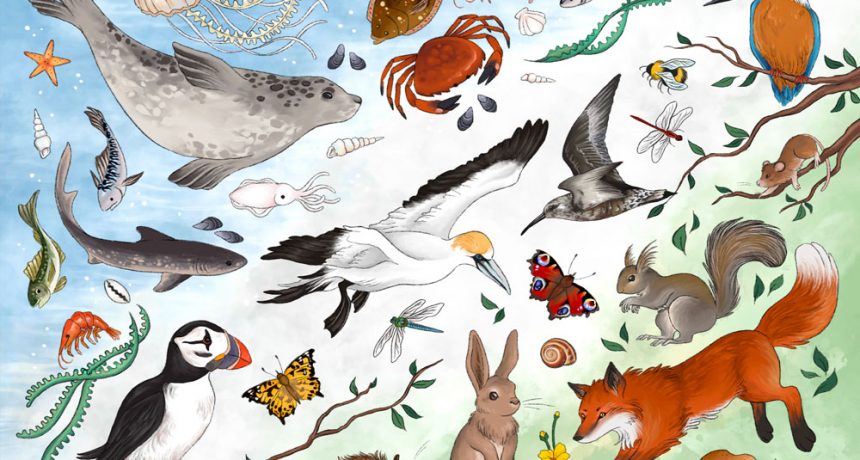 Highlighting the variety of Cornwall’s wildlife, covering mammals, birds, insects, fish and wild plants that you can encounter all over our beautiful county. Many of these species are protected and monitored by local organisations and charities, such as the Grey Seal – brilliantly cared for by the Cornish Seal Sanctuary, as well as the Cornwall Wildlife Trust. 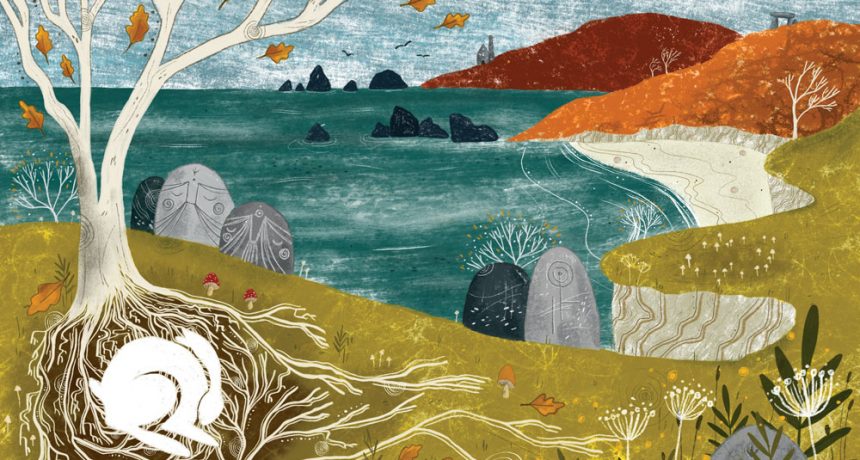 Inspired by the Cornish landscape as well as its heritage and folklore, aims to remind and encourage people to protect the landscape and its wildlife. Following an outbreak of myxomatosis in 2018 there was a large decrease in the population of British hares, this illustration crucially highlights the need to ensure the protection of this native species. 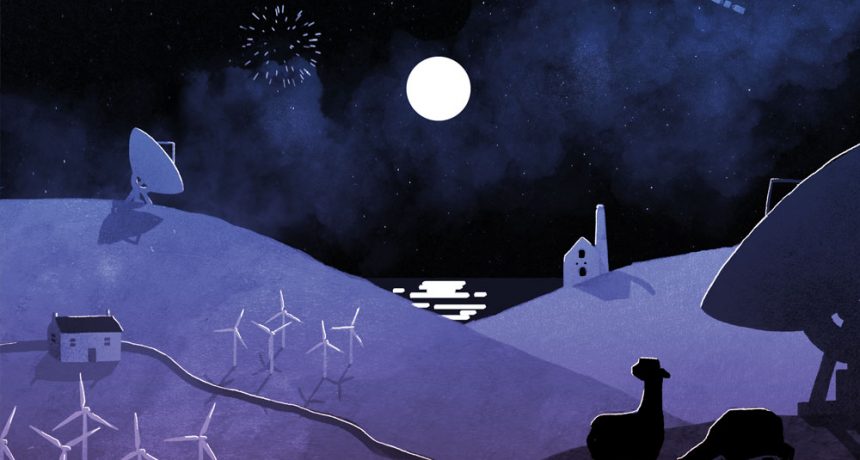 Inspired by my love for the stars – Goonhilly is one of my favourite places in Cornwall and so I had to include it in my page of the calendar! I wanted to evoke a sense of simultaneous calm and wonder, and tie everything I love about Space and Goonhilly back to the Cornish landscape that it grew from. 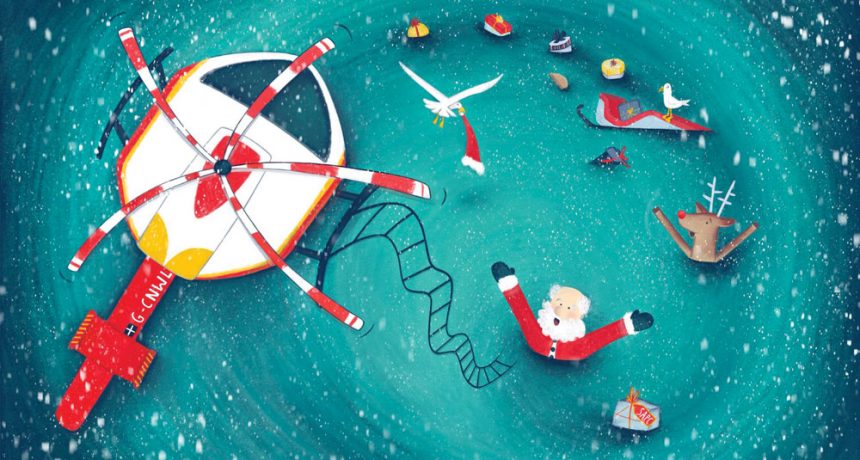 This illustration highlights the extremity of conditions the Cornwall Air Ambulance face during the year through wind, rain, hail and snow. Flying more than 800 life-saving missions each year, this time it’s up to them to rescue Santa off the Cornish coast following an unexpected crash landing. But will he make his deliveries on time?