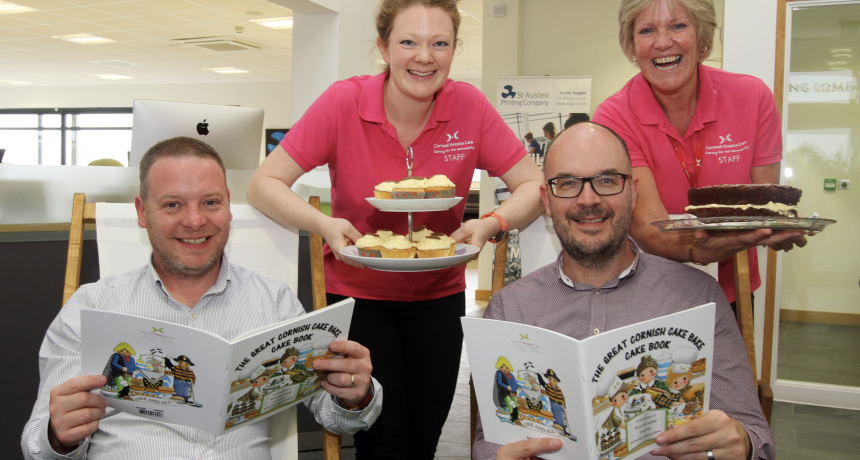 A Cornish charity is hoping to inspire the next Mary Berry and Paul Hollywood after working with St Austell Printing Company to create a new cake book.

Launched by Cornwall Hospice Care (CHC), The Great Cornish Cake Bake Cake Book compiles cake recipes and the memories of the people – staff and supporters – behind them.

Judy said: “The idea for the book came after our first Great Cornish Cake Bake day in 2015.

“We found that there were so many lovely and inspiring stories and memories behind the recipes that people were using for the event, so we thought creating the book would be a great way to collate them all together.

“It’s also a great way to learn how to make new cakes!”

The book was designed and printed by St Austell Printing Company (SAPC) in the company’s purpose built factory in Carclaze where Judy worked alongside graphic designer, Ben Pipe.

Judy said: “The team at St Austell Printing Company have been brilliant supporters of the Cake Bake, so it’s fantastic that they were able to help us again with creating the book.

“The company was a gold medal team during the 2016 Cake Bake raising over £650, so to have them involved with this project was amazing.

“Ben did a brilliant job and the feedback we’ve had from people already goes to show that.

Mark Naylor, who works in SAPC’s print shop, also has a recipe – Eastbourne Pier Donuts – featured in the book.

Mark said: “It was lovely to reminisce about my Nan, visiting Eastbourne Pier and enjoying the amazing donuts.

“I am proud to be part of the book and support the charity. Hopefully people will enjoy the recipe and create memories for their family.”

The book was officially launched at the Royal Cornwall Show and is now on sale at CHC’s charity shops across Cornwall, as well as on the charity’s website priced £6.99.