Every year we team up with talented illustration students from Falmouth University to release the official St Austell Printing Company Calendar.

It’s easy for the truth to get distorted or exaggerated. Facts can be selective and when taken out of context can be interpreted differently.

It’s important to understand that it’s not always malicious. Sometimes a tale evolves into a myth over time to become more entertaining – or to serve an alternative purpose.

We work closely with Two Sides to dispel myths around the environmental effects of paper and print – and tell both sides of the story.

The misconceptions about print and paper are still a major issue for the industry. All too often, we see messages from organisations such as; “Go Green – Go Paperless” and “Do your bit for the environment and choose e-billing”

These messages are unsubstantiated, misleading and can have a lasting effect on consumer perceptions of print and paper.

The print and paper industry is a world leader when it comes to sustainably-managed materials, renewable energy and recycling.

The brief given to our illustrators

“Create an illustration around the theme of Myths and Facts.

Make your illustration topical for a month reflected in your use of colour, imagery or tone.” 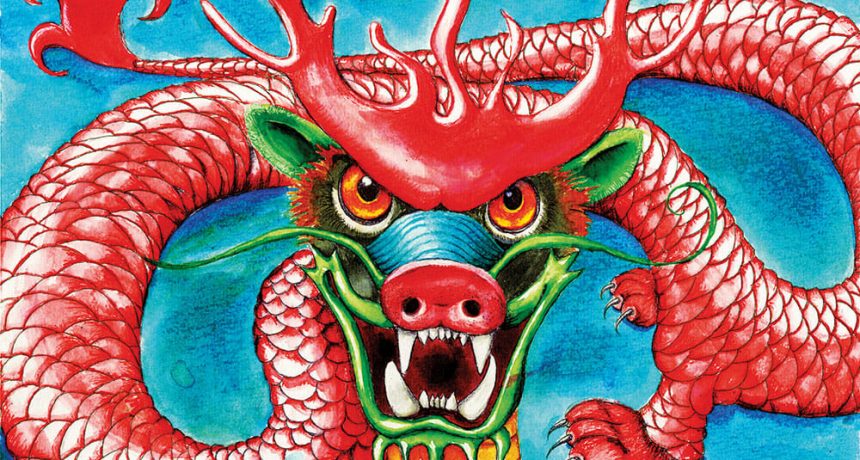 The illustration portrays progress and innovation in Cornwall in a sweeping narrative from past, to present and the future. The illustration highlights Trevithick’s steam engine which helped fuel the industrial revolution, companies such as St Austell Printing Company embracing renewable energy, and the famous Goonhilly Satellite Earth Station who are developing the capability to support the exploration of Lunar and Deep Space for institutions and private enterprise. 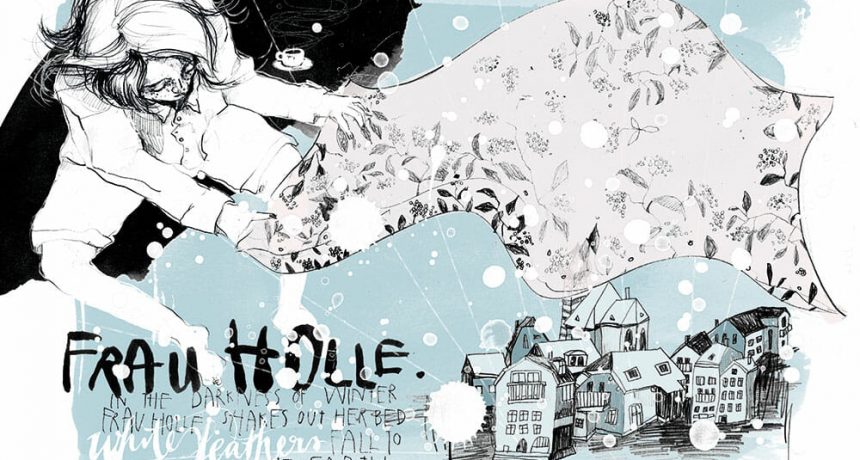 Frau Holle is one of Germany’s most famous female legendary figures. Every morning, in the darkness of winter she shakes out her bed. White feathers fall to the earth. Magically they cover the little town in a blanket of snow. 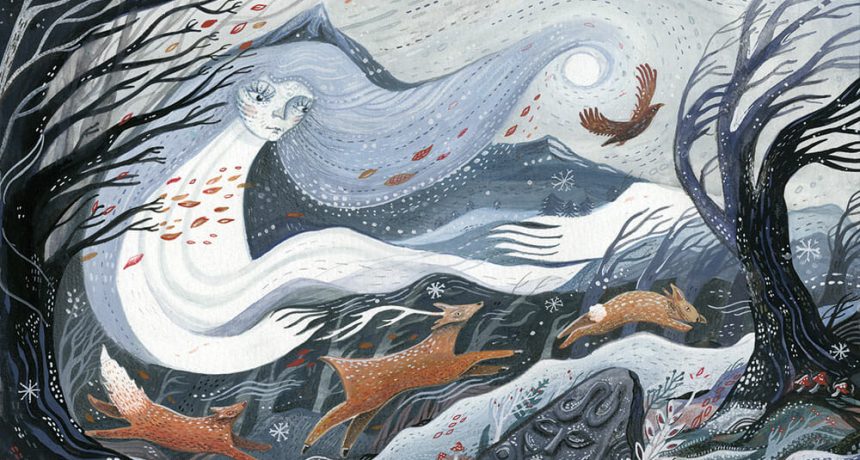 In Scottish Folklore, Beira is represented as the Queen of Winter and mother of all gods and goddesses in Scotland, ruling over the vales as creator of ice, snow and wind. Whilst holding the land in icy grip, she is followed and loved by many wild animals. 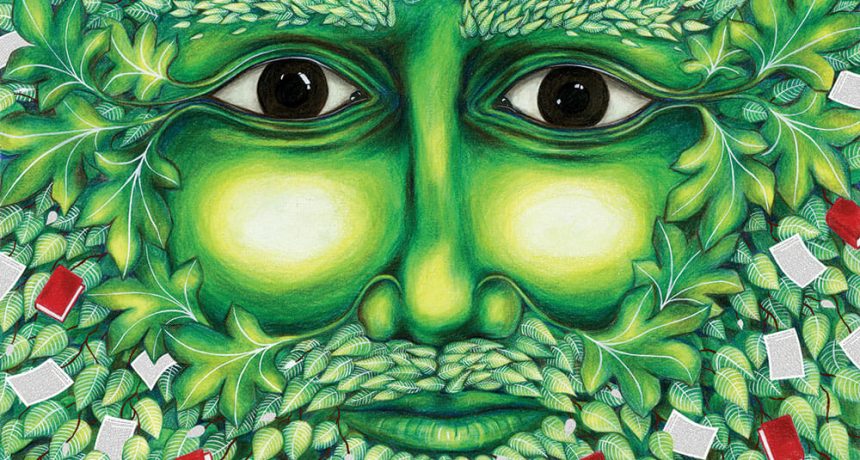 The mythical character of the green man is a symbol of mans unity with nature. The way his beard turns to paper and books shows the cycle of new life and growth, reflecting the sustainability of the publishing industry. 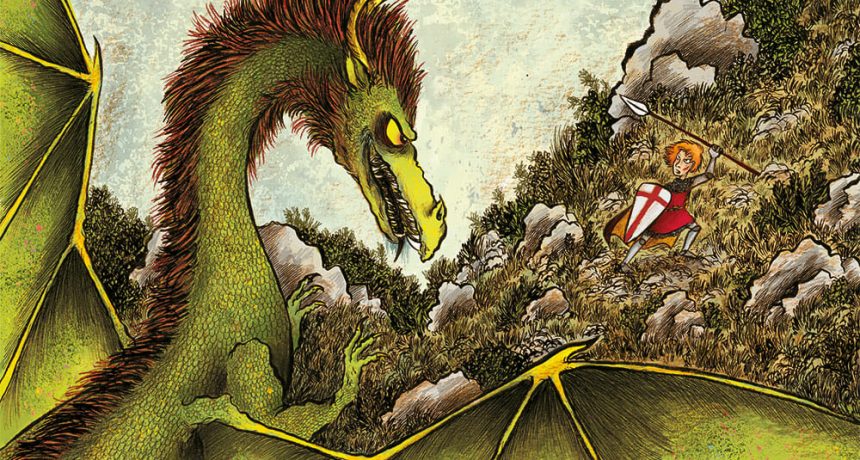 This illustration celebrates St George’s Day on April 23rd. The day commemorates the patron saint of England who, according to legend, bravely fought and killed a dragon. 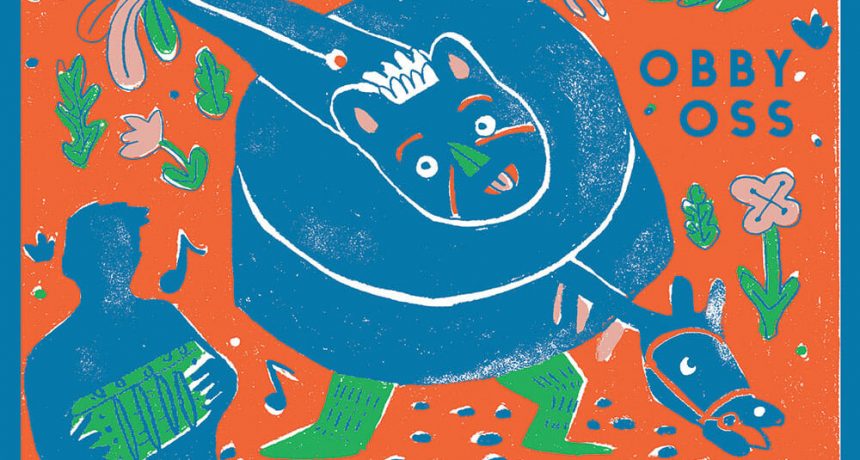 The Obby Oss is a Cornish May Day festival that takes place yearly in Padstow. It involves two main hobbyhorses that travel through the town in procession, with accordion players and dancers. The origins of the festival are debated however, it is likely a welcoming event for spring. 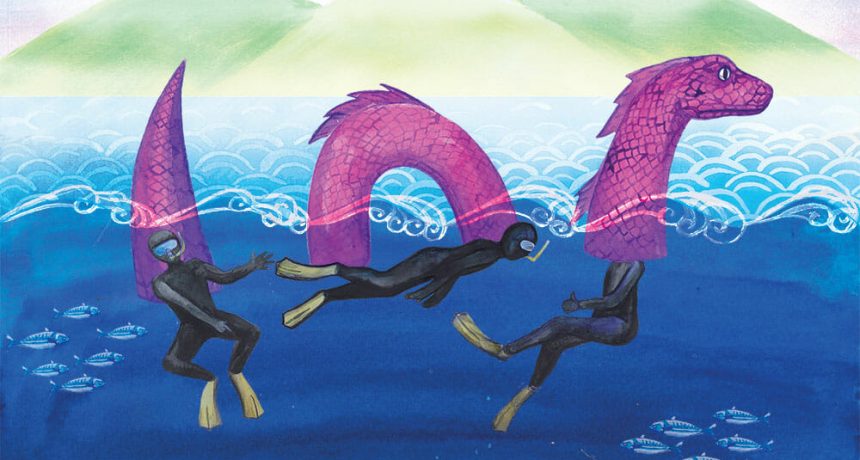 An illustration questioning the truth of the Loch Ness Monster. 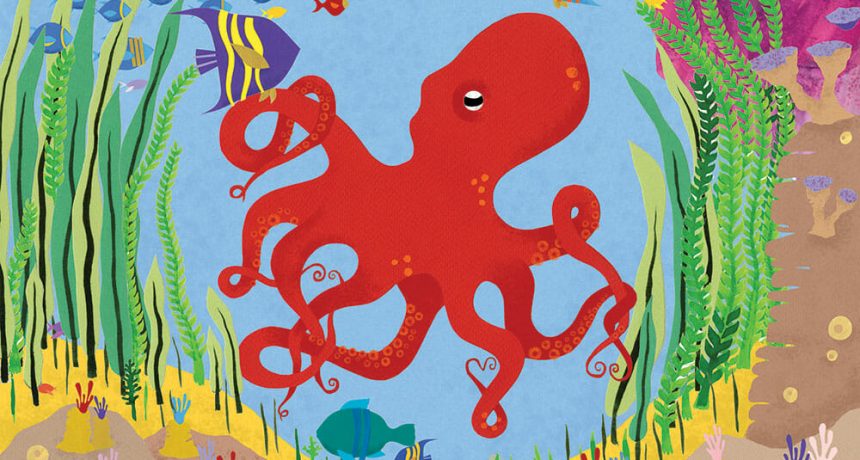 This illustration was inspired by the unusual fact that an octopus has three hearts. It uses two to pump blood to its gills and the third to pump blood around its whole body. If you look closely, I’ve hidden three hearts somewhere in the octopus’ tentacles! 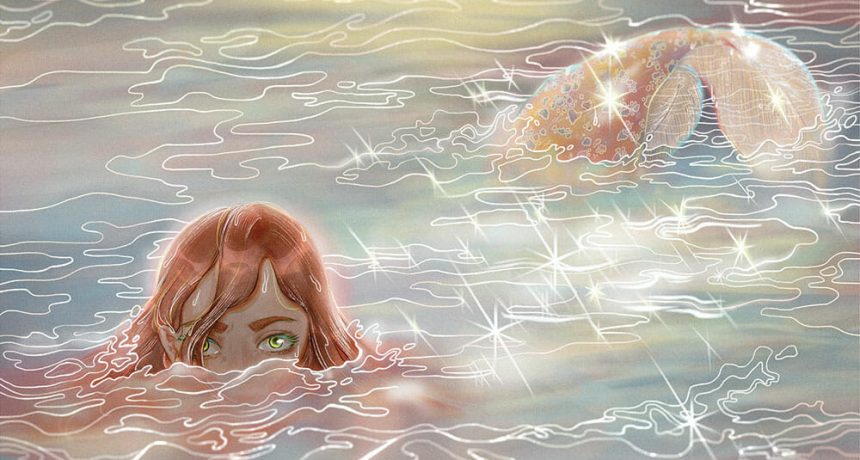 Mermaids are a legendary aquatic creature with the head and upper body of a female human and the tail of a fish. 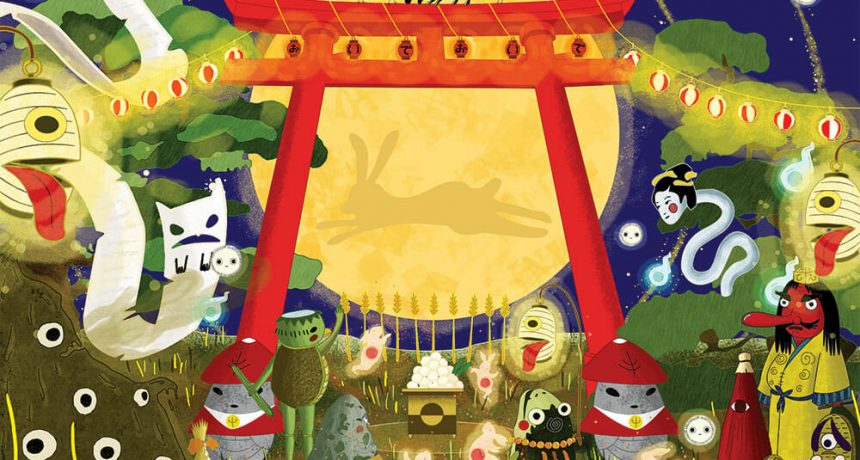 In Japan, September/October is celebrated by the O-Tsukimi (Moon Watching) Festival. O-Tsukimi takes place on the 15th day of the eighth lunar month, when the moon is said to be at its brightest and most beautiful. This time marks the end of the traditional harvest season, when ingredients are at their most bountiful, thus we celebrate it by eating wa-gashi and drinking tea. 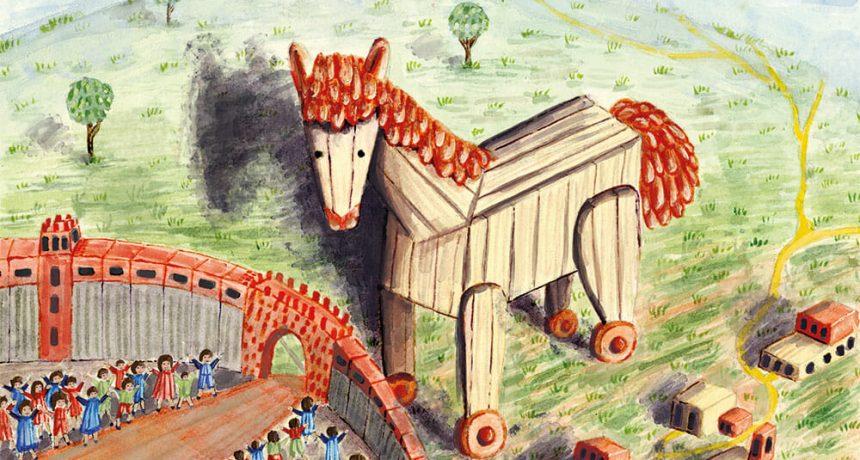 This illustration depicts part of the Trojan Horse myth. In the story the Greeks used a giant wooden horse to infiltrate the city of Troy and win the 10 year long Trojan war. 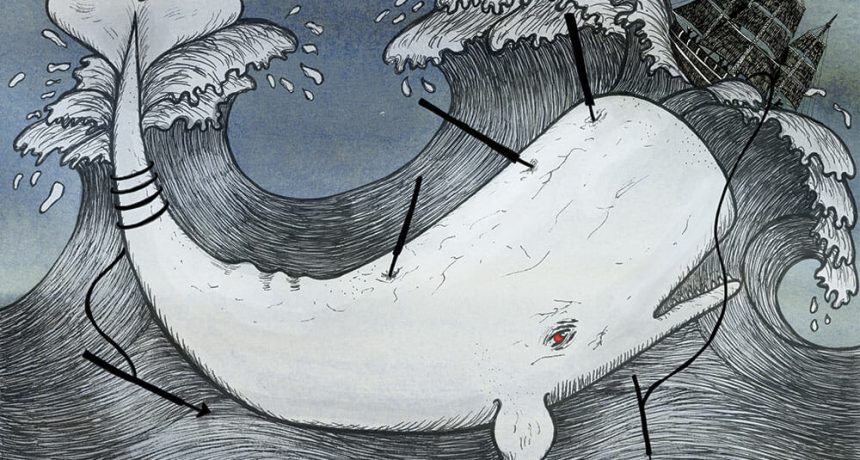 This illustration is inspired by Herman Melville’s novel Moby Dick. A story inspired by real events, however some believe the white whale itself to be a myth. The illustration shows the peak of the story as Moby Dick, charges towards the whaling ship after being harpooned by the sailors. 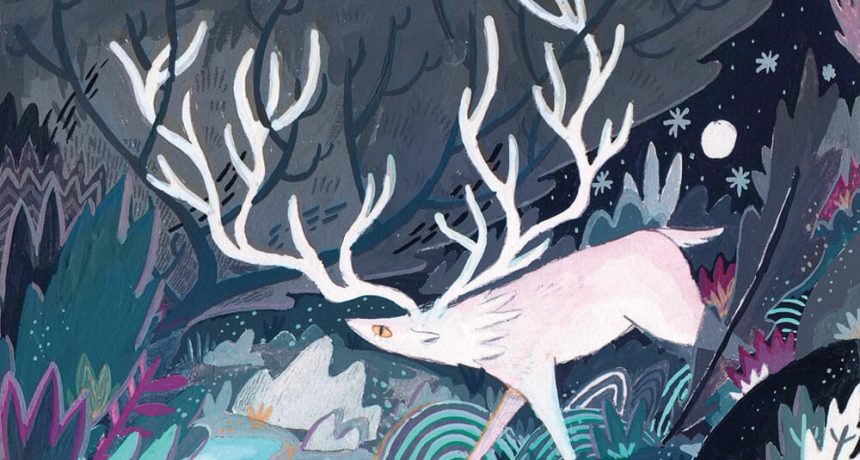 In ancient celtic myth the White Stag or Hart was a sacred creature. Wandering through the dense tangled forests and wild moorland of our past, this elusive and rare being was said to be a messenger from the otherworld, signifying a great spiritual transformation for the fortuitous voyeur. 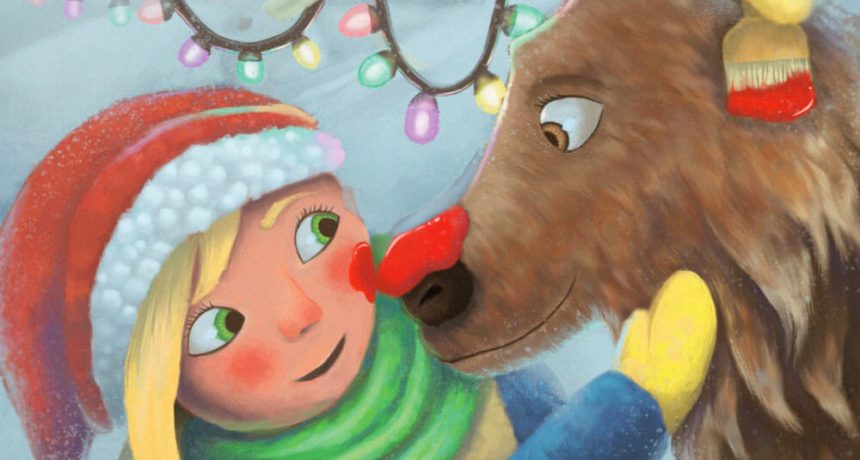 A reimagined take on the myth of Santa’s favourite sleigh helper and his shiny red nose.